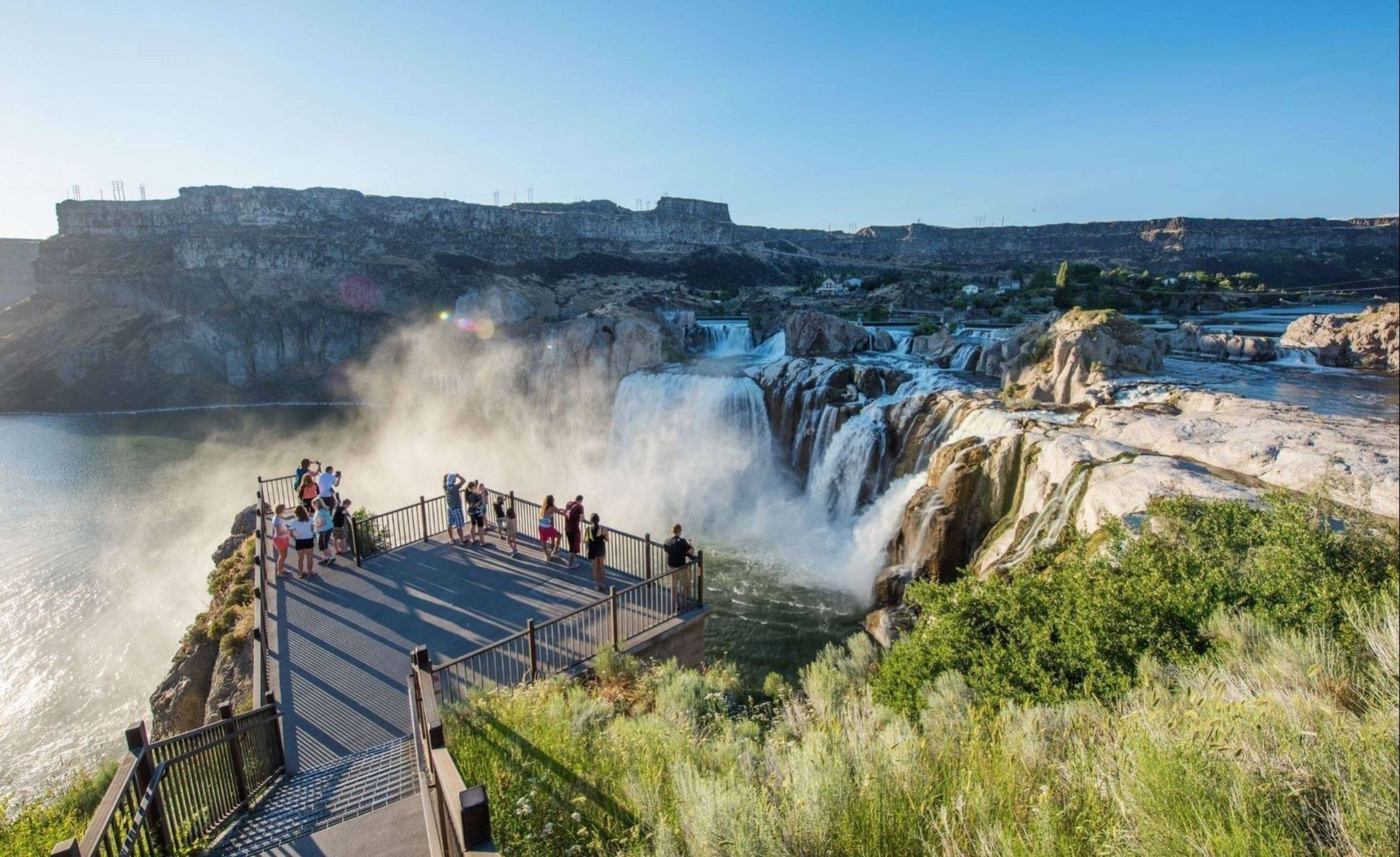 "The Niagara of the West"

The flow of the Shoshone Falls is dependent on many variables. One of which is the amount of snowfall our region receives each winter. On years with heavy snowfalls, Shoshone Falls can reach flows upwards of 20,000 CFS (cubic feet per second). In a typical year, the spring flows at Shoshone Falls will peak between 10,000 and 12,000 CFS.

Spring, when the snow pack begins to melt, is the best time to see Shoshone Falls. In the summer months, a portion of the river is diverted for irrigation purposes, which reduces the flow over the falls. In the Fall, you will often experience a minimal flow where Shoshone Falls will appear nearly dry. At this time, the majority of the water coming down the Snake River is used to recharge the reservoir system upstream of Shoshone Falls.

The Snake River serves as the lifeblood of our region. Harnessing the water from the Snake River for irrigation is a crucial part of our local economy. Twenty miles upstream, the water is diverted to irrigate over 500,000 acres of farmland. It is estimated that the crops produced in these fields are worth $62,000,000 annually.

The vehicle fee at Shoshone Falls Park and Dierkes Lake is $5.00 per car. The fee is in effect from March 1st through September 30th. Season passes are available for purchase for $25.00 at the Parks and Recreation office and at the ticket booth. Coupon books are also available for $30.00 for 20 passes. Tour buses are $20.00 at the gate and school buses (full of children) are $5.00.

Shoshone Falls is open year round with the exceptions of temporary closures due to poor road conditions. The park hours are from dawn to dusk.

Tourists have been known to visit Shoshone Falls as early as the mid-19th Century when travelers along the Oregon Trail would detour from the trail to visit the Falls. As early as 1900, locals called for the creation of a national park; however, Congress never approved the proposal. In 1932, Federick and Martha Adams donated the land to the City of Twin Falls with the stipulation that the land be maintained as a public park. In 1933, The State of Idaho donated land to the west of the original park site to the City Of Twin Falls.

Shoshone Falls is just one of many spectacular water falls in Southern Idaho. Visit https://visitsouthidaho.com/waterfalls/ for a list of waterfalls that surround the City of Twin Falls.

To view the live video feed, scroll down or visit shoshonefalls.tfid.org

Is there RV parking?

Yes! Shoshone Falls Park has five pull through RV spots that can accommodate most RV’s and Tour buses (day use parking only).

Unfortunately, no. Shoshone Falls and Dierkes Lake do not offer over night camping.

Are dogs allowed in the park?

Yes! Dogs are welcome in Shoshone Falls park as long as they are on a leash. The only exception is, dogs are not allowed in the grassy area of Dierkes lake.

How far is the walk to see the Falls?

Its just a matter of a few feet! The closest parking spot to the main viewing platform is just 75 feet away. However, we do encourage you to take a walk up our canyon rim trail and view Shoshone Falls from multiple vantage points!

Are the Falls wheel chair accessible?

Yes! Shoshone Falls is ADA accessible. There are multiple places to view the Falls without having to go up or down any stairs.

Are the Falls on?

This is our favorite question, and most common. Depending on the time of year and other important factors the answer to this questions varies. Unfortunately, it is not as simple as flipping a "switch". The flow of Shoshone Falls is determined 20 miles upstream at Milner Dam by the United States Department of Reclamation, who manages the reservoir system along the Upper Snake River Basin.